This might be my first new post in a few months, really. The remainder of the posts here were scheduled a couple months in advance. This works well for my busy schedule going to school full time while working 40 hours a week. I occaisionally throw a bunch of posts on the rollers and let them post out at a leisurely rate every few months. The only problem with this is that, until this week, I forgot there were 31 days in August. I blame you, Augustus, though apparently I shouldn’t thanks to this debunked theory of month-lengths.

Anyhow, let’s see, what shall I post today? How about some videos? Those are easy.

(This is Cyriak’s YouTube channel, with many more weird cat videos.)

Ahhh, that was refreshing. More tomorrow, which I’m pretty sure is September the 1st, but I could be wrong.

I made a diagram of my class assignments I had to hand in, so I could black out one section upon completion and actually feel like I was getting somewhere. It took my wife to show me that it kind of looks like a brain. Neat. 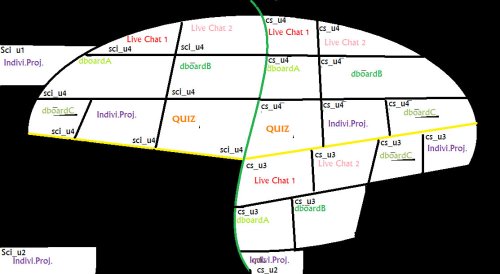 I swiped this from Woosk.

I just needed a break from my writing assignments I’m doing as homework for 2 classes, to do something fun for a moment. Fun for me, maybe for you, but that’s secondary to my goals at the moment, sorry.

See, I’m not much of a debater. Well, let’s say that I don’t enjoy it. I like taking another side once in a while when there’s nothing on the line. Advocacy of the Devil, etc. However, when I have to take a stand on environmental issues for an assignment when my heart is only partway into it…well, it’s not that much fun, and as a result I make it out to be a lot harder than it needs to be.

Political correctness is a struggle for me, and most of the time I just do the best I can and ignore the rest. When it comes to alternate points of view that might be correct, I just don’t debate the topic, because frankly I just don’t care about much of anything at the moment to actually want to debate much about anything.

Maybe this is due to the Vikings picking up Brett Favre for a quarterback. By the way, if anyone back home is reading this, No, I do not want to watch any of these games, and I may just tune out of the NFL for the remainder of the season. I’m already planning on taking a blow-dryer and removing that chrome doo-dad I have stuck to my car reading “Vikings”. I just stopped caring about the team and the league when this happened.

And so my malaise may have drifted into other things, but the malaise predates any deals Brett made with the Vikings. How about non-Christian religions? I used to be a die-hard Christian. I have since drifted, and while I understand and obey the tenets of the church, I kind of don’t care. My heart isn’t in it.

And why is this? I don’t know. I’ve learned a tiny-bit more about other religions in the last year, but I don’t think that was enough to sway me. Otherwise, I’d be a Taoist right now.

Is it because we don’t have any family on this side of the nation? True, we now live about 1000 miles from our nearest friends or relatives, and the lack of peer-pressure or family-support (take your pick) may have led to my wanderings.

I think a lot may be a generational thing. I’m supposedly in Generation Y, meaning Why should I care? I’m burnt out with politics, having voted for George Dubya and joining the military before becoming disillusioned with both to a large extent. The American Auto Industry is down to one decent company (Ford), one government-owned company (GM), and one…who knows what (Chrysler). I voted for Obama, and while I think his path is stronger than the predicessor’s was by a long way, it will just take a lot of time to find out for sure. Were people more patient in the 30’s? The “bonus army” waited until 1932 to try to get their military bonuses from World War I. But the great depression is a magnitude worse than what we’re experiencing. I still have a home, high-speed internet, a television, a cellphone, and 4 game systems. Sure, the game systems are previous generation or older, but I can survive on these meager scraps. I still haven’t beaten Grand Theft Auto: San Andreas.

I don’t know, I need to wrap this up and get back to my school work. I just wish I cared about more things right now instead of just whining about how much I don’t care. 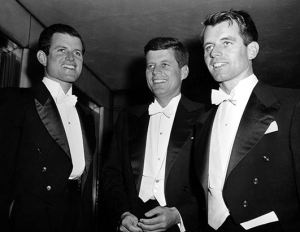 Only Richard Feynman could teach me something new about trains. How did I not know this?

Plastic Minestrone in the Atlantic Ocean

I’d be really surprised if this YouTube link is active when this finally posts, but I highly recommend looking for this story on ABC.com if it doesn’t. We need some aquatic Wall-E robots, bio-degradable plastic, and a drastic change in trash-habits, not in that order.

How To Make A Baby (clean)

My first thoughts, in approximate order of receiving them:
1) Satan is a lot shorter than I imagined.
2) Wait, that wasn’t Satan! That was the Easter Bunny! You Idiots! You animals!
3) Well, if it was the Easter Bunny, I guess that’s at least a pagan icon who was killed…and that’s good for who exactly?
4) I’m glad they got law enforcement involved with this announcement. I’d hate for there to have been something better for that guy to have been doing.
5) I can’t believe tickets are only $10. You could have charged a lot more since the entire (insert opposing political party here) will be attending.

The Cuteness of Feline Cerebellar Hypoplasia

…yeah, me neither. But it was only a minute.

I swiped this from here: I have seen the whole internet.

I love it when older famous people completely discard Twitter. I don’t know why.

I have had three incidents in the last two months involving strange or careless behavior of law enforcement in this area. I realize that, by posting this on my blog, I’m probably painting a target on my car (despite having donated 2 years in a row to supply Kevlar vests to law enforcement, with the stickers to prove it). But last night is just the last straw.

I’m going to go in chronological order. About two months ago, shortly after I started my night job near Dulles, Virginia, I was driving along Highway 7 at about 12:30am. I was in the right lane, driving 45mph with a very clear green light, passing Sterling Rd when a car pulls out in front of me. I quickly swerved to the empty lane to the left of me to avoid the idiotic driver, only to realize that it’s a cop. Brilliant.

About a month later, same time of night, and again, someone pulls out in front of me. This time I had the foresight to honk and give a thumbs-up sign (since I’ve found “the finger” has the ability to enrage bad drivers). I look in the rear-view to see, again, IT’S A COP! Wow…I was expecting to be pulled over for ‘something’, due to the honk and the thumbs-up sign, but thankfully I wasn’t.

Now, last night, I take the toll road. It’s about $3.50 one way, but there was construction on Hwy 7 the previous, blocking all lanes of eastbound traffic, and I was 20 minutes late to work. So I left 30 minutes early so I could relieve the other person working and send them home that much earlier as repayment. The on-ramp to the toll is actually a reverse fork, with southbound and northbound Hwy 15 traffic merging onto the westbound tollroad. I’m on the left fork, and there’s another car on the right fork.

At this point I’ve sped up to just shy of the speed limit, 60mph. The other car matches this speed, remaining in my blind spot to my right. I more or less ignore it, thinking that either he will speed up or slow down enough to allow me to get over to the right. I wait, jiving to Louis Armstrong on the local Jazz station, and chill for the drive to work.

I sped up to 65mph, semi-consciously trying to separate from this other car. After a couple miles, I lean over to my right to look, and the car is still sitting in my blind spot. I’m starting to get a little paranoid, so I decide to speed up to about 68mph. After 1/8 mile, the other car matches my speed again. I let this go for about another mile.

On the next right-curve, I shifted my car into neutral to coast, so I would decelerate quickly, but also so my brake lights wouldn’t show. The other car zooms past me for a moment, then the car brakes hard. This is freaking me out, and I’m about to call 911 when the other car puts on his police lights.

All this time, this dude freaking me out is a cop.

I pulled over to the left shoulder, since the cop was blocking the right lane, as he had been for about the last 4-5 miles. I rolled down the window and left my hands on the top of the steering wheel as he walked up to my car. He came up, and asked me what I was up to. I explained, in clear terms, that an unknown car had been pacing me for about 5 miles and I was trying to get away from this car. There had been some gang activity in the area recently, and I had no idea what the intentions of this unknown driver were. He claimed that I was driving 74mph (completely untrue), and that I was swerving within the lines. I may have swerved when I leaned to my right in order to see if he was still following me, but otherwise I was driving steadily.

I didn’t get a ticket or a warning, just a request to drive safer in the future (?!?). I’m sure I will abide by this request as long as I’m not stalked by unknown law enforcement vehicles who remain unidentified in my blind spot at a high rate of speed!

Dilbert: a view on catch and release

Many thanks to Scott Adams.

And now, your moment of Zen.

3 PSA’s from the future

If Extra-Terrestrials are watching our TV…

…then this is what they’re viewing right now.

Well, I’ve imported my blog from Blogger to WordPress. See, WordPress has a bunch of features that Blogger doesn’t. Enjoy the new look as I make various tweaks.

This is a pretty good source for those many short fairy tales by the Brothers Grimm. This is an ANCIENT webpage, so all of the stories are in “.txt” format. I posted this because I prefer the dumbed-down stuff to the “.pdf”, since I don’t have a portable device to haul the stories around with.

Very cool drawings of various superheros, in a unique design.

New profile pic for some things

This is me listening to Devil Smurf. He’s telling me to do things, like post this picture. He’s not really the devil, he’s just from a misunderstood alternative religion.

Tasteless? Maybe, but pretty accurate though.

The problem with blogging

The problem with blogging

Just a fun slideshow of scary movie actors, and how it’s been difficult to get beyond the scary roles they’re attached to.